THIS WEEK'S MEETING
Maleny Hotel at 6:30 for 7:00pm for a Business Meeting.

PRESIDENT'S NOTES
A huge thank you to the Club; it has been a privilege and honour to serve as your President. I would like to thank  all of my Board members as well as every member for their contribution to our many community focused projects during the past year.  This has made a real difference to our Maleny community and beyond.
2022/23 Changeover: It was great to see the advertisement for our 2022/2023 Changeover Dinner Invite in the latest edition of the GIST. I am hoping for a huge club turnout at the Maleny RSL on 29 June to welcome our President – Elect Paulette Steele and her new Board to their collective leadership of our Club during our next Rotary Year.
Detection is the Best Prevention:
Just a reminder that its time to get your Rotary Ticket to Good Health in the form of a Rotary Bowelscan Queensland test kit available for $22 from our local Maleny Star Discount Chemist.
Rotary District 9620 Assembly on 12 June:
President-Elect Paulette S, together with Bernice and John McL and myself, will be joining members of other SC Rotary Clubs for a bus trip to Centenary State High School, Jindalee for this District Assembly. We will report back at our next meeting
Maleny Education Support Fund:
Fantastic news from Sherryl G regarding another very significant donation to the MESF by the MCU Charitable Trust.
Koala fodder trees project at Spring Pastures Drive Mapleton
Paulette S and I will be attending a breakfast meeting on 15 June at Woombye to assist Jan Lawton (RC Woombye Palmwoods)  and Rod Tunstall (RC Nambour) with finalization of the MOU with Sunshine Coast Council for the project.
Speak Up Now Say No to Domestic and Family Violence:
>Huge congratulations to Sherryl G, Dr Barb Jones and Val France for their pilot workshop at the River School – respectful relationships and kite making on 3 June. Sherryl G had the students mesmerized with her storytelling and, after making their kites with our assistance and then decorating them, it was a joy to watch the students energy and exhuberance flying their kites on the school oval. The attached article appeared in this weeks edition of Glasshouse Country and Maleny News. 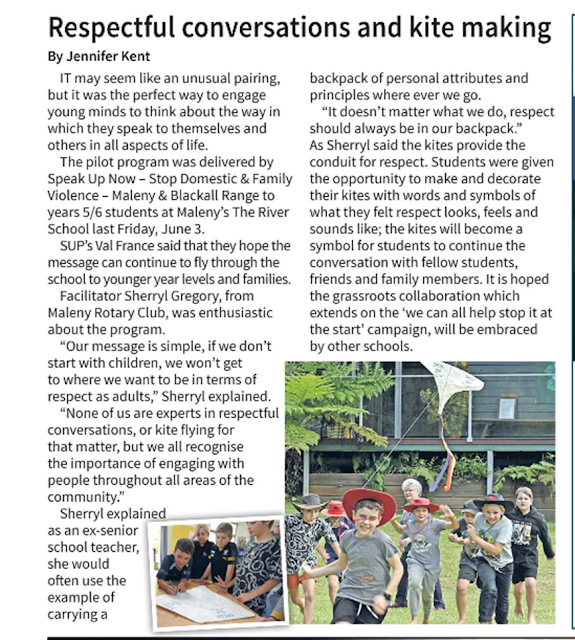 In recognition for their great contribution to our Sunshine Coast hinterland community, our Speak Up Now Partnership has also just received the attached  nomination for a Qld Volunteering Impact Award.

21 July RYDA - Rotary Driver Education in Caloundra:Confirming that this program will again be held at Corbould Park. MSHS students will be attending that day and it will be one of our leading Youth Projects for the year. We are expected to provide volunteers for that day and at least one of the other days of the program. Paulette will advise us on upcoming training and other details over the coming weeks.
2022 Pride of Workmanship Awards Dinner:
Planning for this event to be held on 31 August has begun. With this project so closely linked to our business roots, and with local businesses within our community, it is our hope that as many of our Maleny Rotarians as possible can attend this ceremony. Further details as to venue and costs will be available in the near future.

MINUTES OF MEETING OF 18TH MAY
President Greg opened the meeting with the normal formalities after welcoming members and guests Peter Williams, the owner of the hotel, Nick Paterson, the new Police Sergeant, and our speaker Jodie Nolan, the manager of the Maleny branch of Queensland Country Bank.
Peter Williams thanked the Club for the invitation and for its long standing patronage of the hotel which he hoped would continue.  He spoke in general terms of his plans for the future.  Sergeant Nick spoke of his previous work as a detective and his hopes for his new role in charge of the Maleny police station.
President Greg thanked Roly and Jim for their organisation at the Show which produced great results in difficult circumstances. He also thanked all those who had volunteered to assist.  Roly and Jim then gave an update of how things had panned out.
Paulette reported on her trip to Toowoomba for PETS. It was a useful meeting with about 160 attendees. With good food and drink available, she felt bad that we all working at the Show.
Sherryl told us that Speak Up Now is continuing to spread its message.. The 7th Red Bench had been unveiled in Palmwoods and a Kite workshop will be held at the River School on 3rd June. 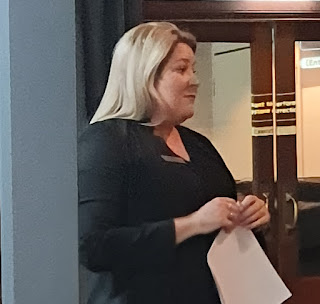 Jeff C welcomed our Guest Speaker Jodie Nolan from QCB.  Jodie said how happy she was to be living in Maleny with her two children, who were attending MSHS, and to be managing a customer owned bank. She explained that this was a departure from her previous role of more than 20 years in financial planning including running her own successful company and writing a successful book on the subject.  She believed she was well placed to offer services and advice to both individual and companies and looked forward to seeing any members of the Club. 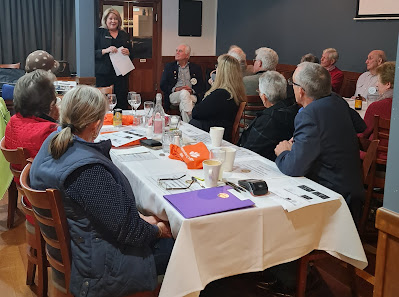 Craig gave the vote of thanks.

"Wicket keeper" - puts on gloves and stands back

"Grenade" - waiting for him to pull the pin

"Sensor light" - only works if someone walks past

"Blister" - appears when the hard work is done

"Lantern" - not very bright, and has to be carried

"2-stroke" - hard to get started, and always smokes

"Bushranger" - holds everyone up

“Pothole” – Always in the road, needs to be filled in

“Wheelbarrow” – Only works when he’s pushed

“Scarecrow” – Just stands around all day and watches

“Chainsaw” – Hard to start and stops for no reason

“Perth” – Two hours behind everyone else

Posted by Rotary Club of Maleny at 11:47