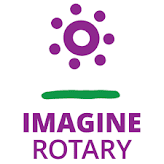 WEDNESDAY 3RD AUGUST 2022
THIS WEEK'S MEETING
Maleny Hotel at 6:30 for 7:00pm for a Dinner Meeting with Guest Speaker Nathan Dodd on coaching cricketers.

PRESIDENT'S MESSAGE
I seem to get an endless amount of emails about different events and causes which I generally pass on to Bernice to forward on to you all. I understand you’re probably too busy to look at all the emails we tend to receive these days. However, a few of these are really interesting or worthwhile so I thought I’d mention a few to you here. You may be interested in attending or donating to them.

The first one is August 2022 Dignity Drive in Maleny. The Dignity Drive is an initiative of charity group Share the Dignity. Share the Dignity believes access to period products is a right, not a privilege. 1 in 5 Australians have been unable to afford period products at some point in their life. All products donated need to be  in original packaging, including pads, tampons, maternity pads, period undies, menstrual cups and incontinence products are accepted. The campaign will be kicking off from 3 August and finish 30 August  2022. Maleny Woolworths and both Star Discount Chemists (Maple St and Riverside Centre) are the donation points.

Next is the End Polio Now walk. The walk is on Sunday 14th August at La Balsa Park at Harbour Parade, Buddina  from 8am to 11am. It’s only a 2km walk and there’s some lovely scenery. Find details below to register. 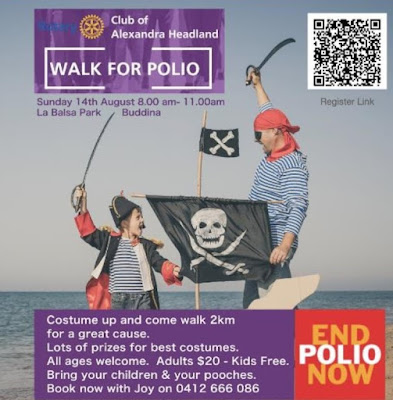 Lastly, we’ve been hearing quite a lot about the Regionalisation Pilot Project lately which we have to vote on in a couple of months. There was an email sent around with times and dates where you can listen and find out more about it. A couple of sessions have already been on and there’s another four to go. So, if you want to be well informed about this Regionalisation Pilot Project, then I suggest you catch one of the sessions left to join in - Sunday 31 July @ 3.00pm, Thursday 4 August @7.00pm, Tuesday 9 August @12.00pm and Friday 12 August @7.00am; hopefully a time there for all of us. I understand they will be recorded as well so you can listen later. You have to register using the following link to select which session you want to attend - https://www.dropbox.com/s/rnjf3h6id5611r3/town%20hall%20invite%20with%20links.pdf?dl=0.

MINUTES OF MEETING OF 6TH JULY
President Paulette opened the meeting by welcoming those members who were present and in good health and wishing that those who were unwell had a speedy recovery.  This was a Business Meeting with no Guest Speaker.

Roly N delivered an update on the farewell which the Club was sponsoring for Rob and Sam Outridge  at the RSL on 21st July.  It was expected to be a wet, cool night which may affect numbers, but 130 people had booked.  The new owners will be attending.

Rick V will run the small programme of formalities that has been arranged. Chris will deliver the Ode before Rob and Sam will be presented with Paul Harris Fellowships for their service in the town.  They really have done amazing things and helped many people over the years. They will be missed.

Post our meeting, some photographs from the event are attached. 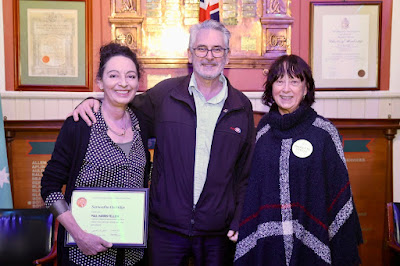 Winton Johnson will present them with the keys to the town. 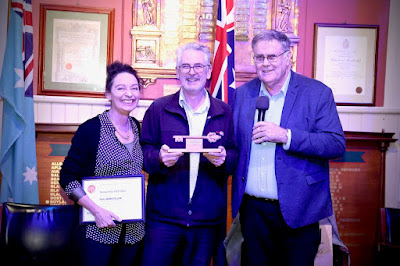 Lisa Plunkett read her commemorative poem which is reproduced below.

Roly and his helpers should be congratulated on the excellent organisation, not forgetting the food. 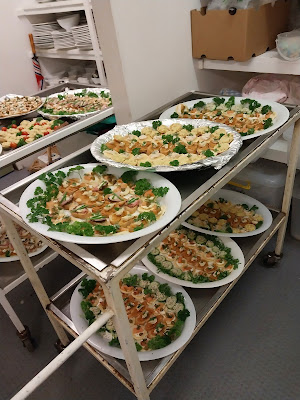 RYDA was due on  21st July with Fran and Renée attending. It has since been reported to have been a wonderful day.  It went off without a hitch and provided the students with life saving lessons - many thanks to our representatives.

Arrangements are proceeding for the Pride of Workmanship Awards dinner to be held on 31 August at the Maleny RSL.

Regionalisation webinar - Register for the session convenient for you.

The Treasurer announced that the six monthly dues had not changed and he looked forward to receiving members' payments.

In the absence of the Sergeant, there was a dob in session - a pleasing aspect was that many members opted for self flagellation!

For many years storage facilities for the Club have been provided by a container in John and Bernice's garden. An alternative solution is needed - and long overdue. Rick and Lionel started the planning process for new storage facility and members contributed suggestions on a white board.

Brian A announced that Probus had Mike Keane as a guest speaker at the CWA Hall on 27 July about the disappearance of flight MH17.  Mike was a former  RAF fighter bomber pilot, a commercial airline executive and member of our Club. Members would be welcome.

31st Aug  Pride of Workmanship Award at the RSL

AND NOW FOR SOMETHING DIFFERENT
LISA PLUNKETT'S POEM

To Sam and Rob

With admiration, gratitude and much affection.

You've really made us quite a town

Throughout the coast we are renowned

Our IGA is envied, famed

I bring with me a cavalcade

An avenue of accolades

How can we bear to say goodbye

We've really got it made.

You've helped to put us on the map

They've heard about the Gourmet Fare

And prowl the aisles inside.

For Noosa ham so succulent

These three I find sublime.

(and I buy them all the time

they've even got Beef Jerky

which makes us all feel … perky?)

There's brands to make you chortle

From near and far they're sourced

And Pomodoro's sauce (of course).

But while I've eulogised these treats

I should have mentioned first,

Community Chest and your bequests

The Groups that you have nursed.

The Food Hampers for those in need

The Schools, the Clubs galore

You've given them and more.

The time ten years ago or so

When we all were minus power

You gave us ice and help and hope

It was your finest hour.

And then there are your wondrous Staff

I cannot name them all

But Janelle – no longer with us

I clearly can recall.

There's Fiona who can put a name

Who serves with style and grace.

The boy who says “Now can you cope

I love it when he escorts me

‘Cause your trolleys are a trap.

They try to get away from me

I'm not coping with the brakes

I'm headed for the gully

Where there lives a big green snake

It's now high time I praised you for

Fifteen hours – all days but one

You deserve a bunch of flowers.

Or better still – the City Keys

Or a Statue in Tesch Park

But why be cast in stone or bronze

Where the pigeons leave their mark.

I've had a wondrous thought

Find a street that has no name

And we'll call it “Outridge Court”.

Developers will have a ball

And streets named after loyal staff

Where Owen Gray can lead the way

We'll have a bivouac

We'll have a children's Picnic Day

And then we'll hit the sack.

We'll have a Ribbon Cutting Gala

And maybe Wills and Kate and George

The Royals could well be there.

We could have Anastasia

A Marching Band with all the Clubs

For whom you've made life easy.

The Fire Brigade, the Hospital.

Cats and dogs from Sippy Creek,

The Schools can have another break

And we'll call it “Outridge Week”.

But whether it’s a Statue

Or a street that bears your name

Please remember that we love you

and please – come back again.

We know that Europe beckons

You deserve a well-earned rest

And THANK YOU Rob and Sam for making

our IGA the VERY, VERY BEST.

Posted by Rotary Club of Maleny at 14:07